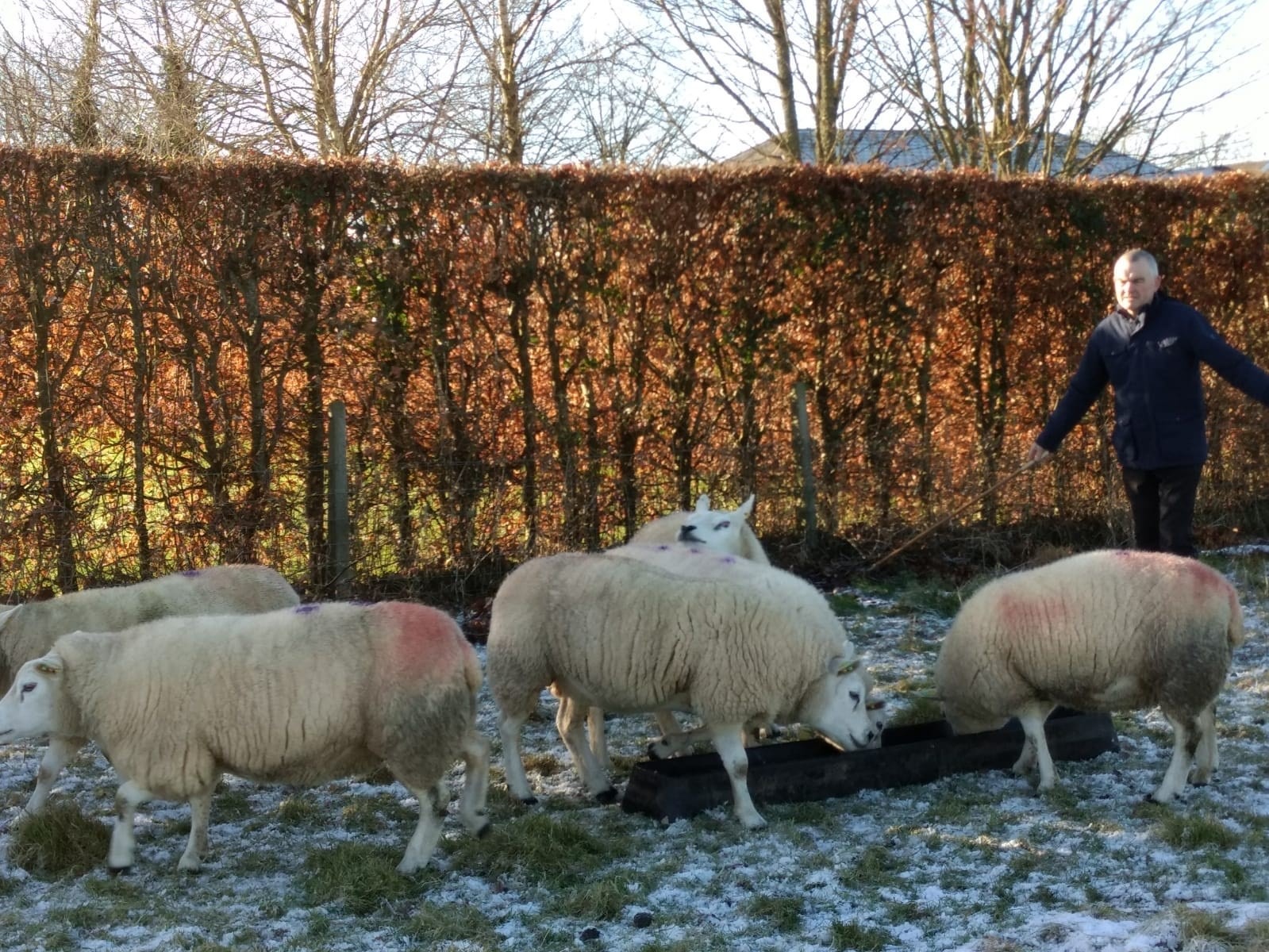 The Montybally Texel flock (MYE) was established by Martin Murphy in 2008 and joined the LambPlus programme in 2010. The flock is based in Ballykeeran Big, just outside Athlone, Co. Westmeath and was involved in the LMI programme before joining LambPlus. The foundation stock for the Montybally flock came from Martin’s home flock, Tysaxon Texels (Est. 1986), with which Martin was involved before establishing Montybally Texels. The home flock is now run by Martin’s brother Michael and has changed its flock name to Moneen.

The main driver of breeding decisions in the flock is to supply what the flock’s customer base wants, which is a ram that looks the part and has €uro-Stars to match.

Martin puts a big focus on both the Replacement and the Terminal index when selecting replacement females or a stock ram. He admits that days to slaughter is a sub-index that he puts a heavy weighting on because he feels the primary role for a Texel is to be a terminal sire and getting lambs drafted for slaughter quickly is central to that. Despite his use of the €uro-Star indexes when selecting animals, Martin stated that any animal he selects for breeding must have good conformation and be physically correct and he puts lots of research in the pedigree of the sheep he purchases, usually stock rams. Blessington Premier Texel sale was a happy hunting ground for Martin over the past few years, in 2019 he purchased Turoe Cassidy (LPP1902745) and this ram is the new driver of genetic gain in the flock with every lamb he produces. The use of the €uro-Star values to select replacement females and breeding rams has resulted in Martin’s 2020 lambs having an average Replacement index value of -€0.49 (-€1.93 in 2017) and an average Terminal index value of €0.64 (€0.15 in 2017).

Data recording is an area that Martin has put a big effort into over the past number of years with the aim of weighing lambs once per month. Martin stated that weights are a key part of performance recording and is an area he focuses on getting right. All lambing data is recorded in the Sheep Ireland lambing notebook and uploaded onto the Sheep Ireland data base as soon as possible after recording. Martin plans to invest in an EID reader in the near future and this combined with using the Sheep Ireland App will reduce the time spent data recording. Martin has recently started recording matings and pregnancy scans and this along with all his previous efforts has resulted in the Montybally Flock having an impressive DQI of 90%.

All ewes are mated naturally and presented naturally for sale as Martin feels his customer base wants a natural sheep that can perform in a commercial flock. Martin has offered rams for use in the CPT in the past and he is hoping to have one involved in future to increase his flock’s linkage and to see how his stock performs alongside the best rams in the country.

The other big focus of Martin’s flock recording effort is genotyping with all animals in the flock now being genotyped meaning all lambs are parentage verified and scrapie certified, giving confidence to the accuracy of his recording system and a unique selling point to his customers.

Martin’s goal over the next few years is to have the flock 100% ARR/ARR scrapie certified and having 100% matches with his parentage results is a great starting point. Having a ram parentage verified allows the customer, whether pedigree or commercial, to have more confidence in the €uro-star ratings and to be sure that they are getting exactly what they paid for. Martin’s approach here was to genotype all replacements entering the flock which allowed him to spread the cost of genotyping across a few years. The high level of genotyping and data collection has resulted in the flock having an average index accuracy of 55%.